From clothes and equipment to household essentials and skincare, this post covers all the bits and pieces that you’ll need on a skiing trip…

I know, I know, I just won’t stop going on about skiing will I?! But each time I go I build up more of an idea of what works well equipment-wise and what sorts of things help in the resort when you’re not on the slopes. So without further ado, the first thing on the list is clothes: 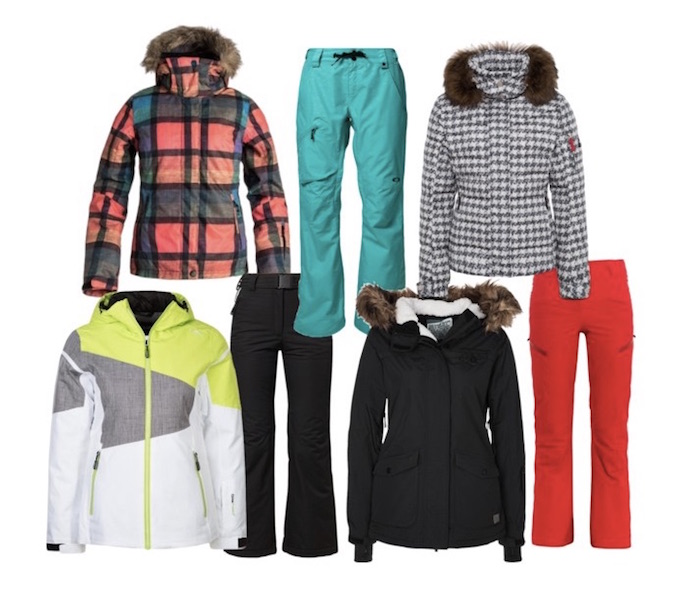 If it’s your first time skiing/snowboarding then there is always the option to hire the larger items – ie. jacket and trousers, however I would suggest having a look around TK Maxx – They do a tonne of ski stuff and it’s all hugely discounted. A couple of years back I managed to get some ski trousers (salopettes) for around £25, and you can usually pick up jackets from around £50ish.
Aside from the obvious ski-wear there are a few other bits and bobs that you need to make sure that you have as well: 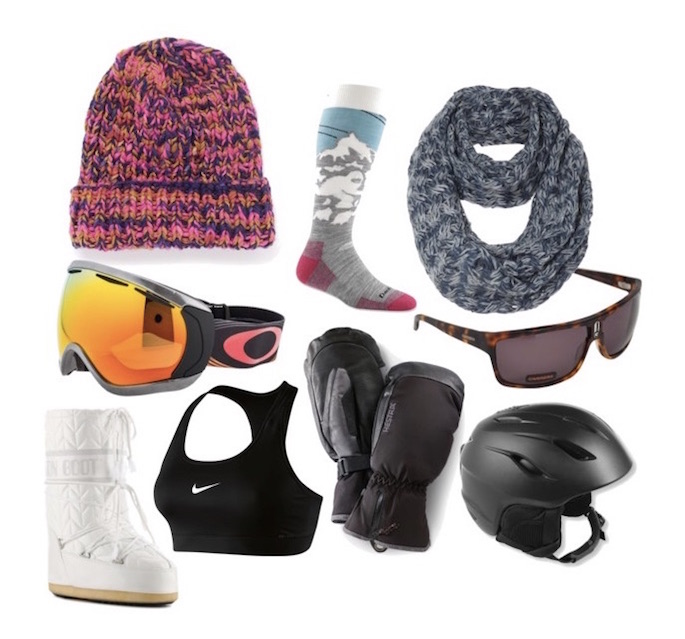 Ski socks – you’ll need to pick up a few pairs of proper ski socks, again TK Maxx will do these, or any outdoor store, they’ll only cost you a few pounds (I wear mine around the house in the winter too 😉 )
Gloves – thick insulated ski gloves are a must, else you won’t be able to feel your fingers! Don’t forget to bring normal gloves too for when you’re out and about in the evenings.
Goggles/Sunglasses – the glare from the snow can be pretty extreme so you’ll need to have either a pair of sunglasses or some goggles to help you see on the piste. I tend to wear sunglasses if it’s fairly warm and then goggles when it gets really chilly. You can pick up goggles for as little as £10/£15, and sunglasses don’t have to be anything fancy – just dark enough to block out enough of the glare.
Hats and Scarves – bit of an obvious one here, but just make sure you’ve got a hat that is going to stay on your head as you whizz down the mountain! Don’t go for ones that are really loose fitting  as they could easily fall off. You can get away with ones that are slightly loose, especially if you’re going to be wearing goggles as the strap will hold them on to a point, but generally I would go for something snug – it’ll keep you warmer too. For scarves I like to use either a snood or a neck gaitor – no loose ends that might get tangled.
As for what to wear underneath, I tend to stick with leggings under my sallopettes and a thin vest and thin jumper under my jacket (if you wear too many thick layers you’ll find you end up peeling them off after not too long, especially if you’re new to skiing as it can be quite hard work at first.)
Sportsbra – I have worn normal bras before and they are fine, but last time I decided to wear a sports bra and it was much more comfortable! I got mine here.
Helmet – Optional really. If you’re at a stage where you’re doing jumps or going off piste then I would seriously consider getting one. Nick has bought himself a helmet this year for the first time, and although I don’t have one this time around I’ll probably be considering one next time.
Footwear – Obviously when you’re on the slopes you’ll be wearing ski/snowboard boots. But don’t forget about the evenings in the resort. You’ll need something with a fair amount of grip – walking boots are a good option, or you could get some actual snow boots – I managed to get some really pretty snow boots for my birthday a couple years back, and you can get various different snow boots for as little as £25. Although if you’re snowboarding, the boots are usually pretty light and easy to walk about in, but you definitely won’t want to be walking about in ski boots for any longer than you need to! 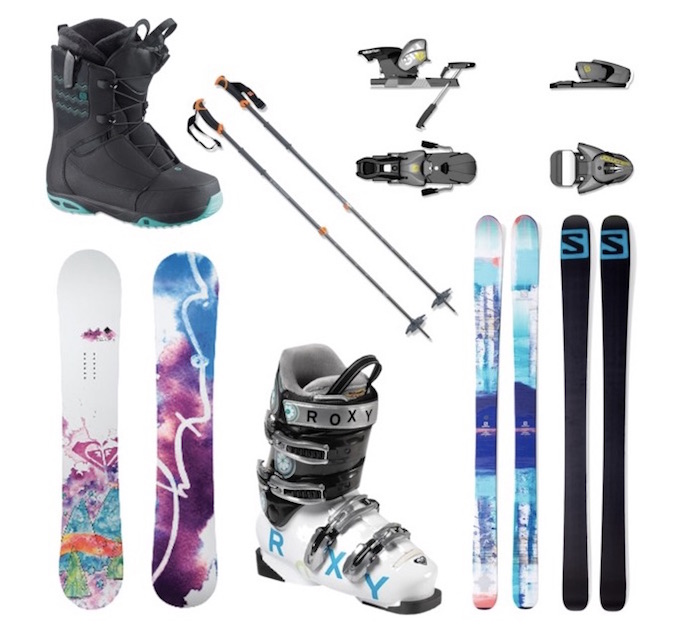 Skis/poles/snowboards/boots – Generally I’d just hire these. The more serious you get, the more you might want to consider buying your own, but don’t forget skis and boards need upkeep. They need to be waxed and have the edges sharpened every two or three years roughly and full services can cost up to about £70.
Nick has his own snowboard and boots, and has done for a while, but I’ve always hired my skis – although it’s got to the point where I’m considering buying my own boots – possibly for the trip after this one. One good thing about having your own boots is that most (both snowboard and ski boots) will get moulded to your feet when you buy them, meaning that they should be much more comfortable than any that you hire. I might just treat myself next year..! 😉 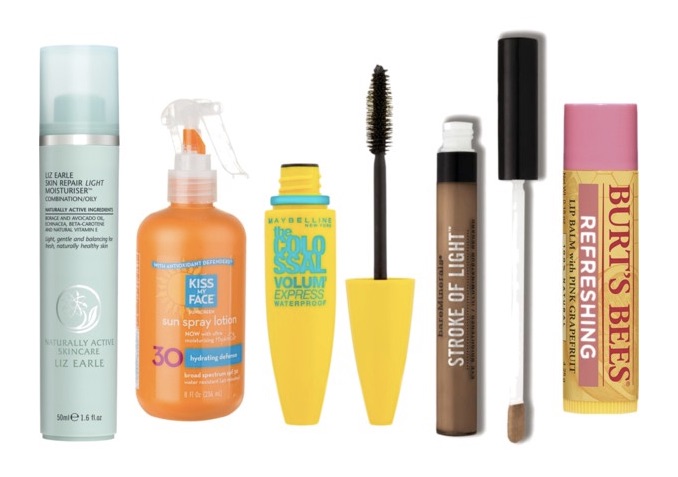 Make sure that you moisturise your face and apply sunblock EVERY MORNING! The sun can be pretty strong even in snow, so it’s always good to make sure your face is protected. Make up wise I tend to go for just a swipe of mascara and maybe a teensy bit of concealer depending on how I feel. People aren’t going to see your face much, so there’s really no need to go crazy, I just find that a bit of mascara makes me feel a little more put together (I’ll make sure it’s a waterproof one too). Also I always carry a lip balm with me on the slopes, as the cold air can make for some seriously chapped lips.

Household items – If you’re staying in a self-catered apartment, there are a few household bits and bobs worth trying to bring with you from home: 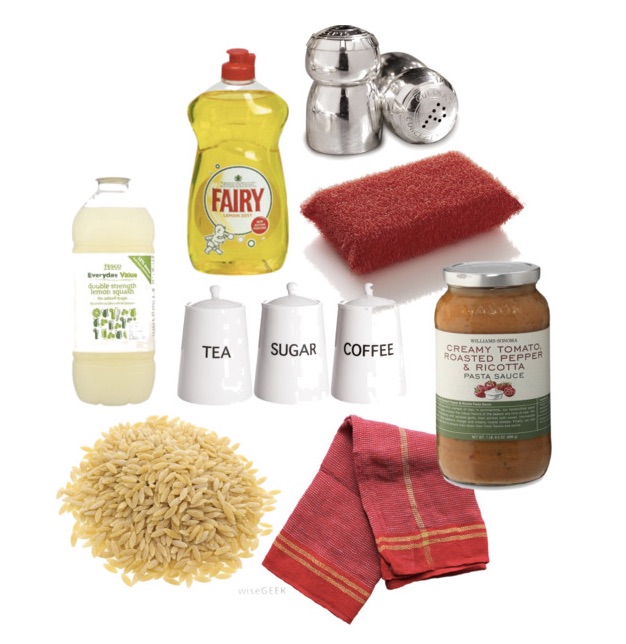 As well as other general bits and bobs ie. toiletries, towels etc.
You’ll want to put these into small tupperwares rather than carrying the whole lot – with the exception of squash although you could probably pick up a smaller bottle to transport it in.
These are always going to be useful  – if you forget them don’t worry as you’ll always be able to get them in the local shop, but it will just be much more expensive. Ski resort supermarkets are always priced highly because everything has to be shipped/flown/driven to the resort, so the prices will reflect the high transport costs. Plus they know you haven’t got much of a choice in where to go for your shopping! 😉
You might also want to bring some deep heat/deep freeze, in case of any unwanted injuries! 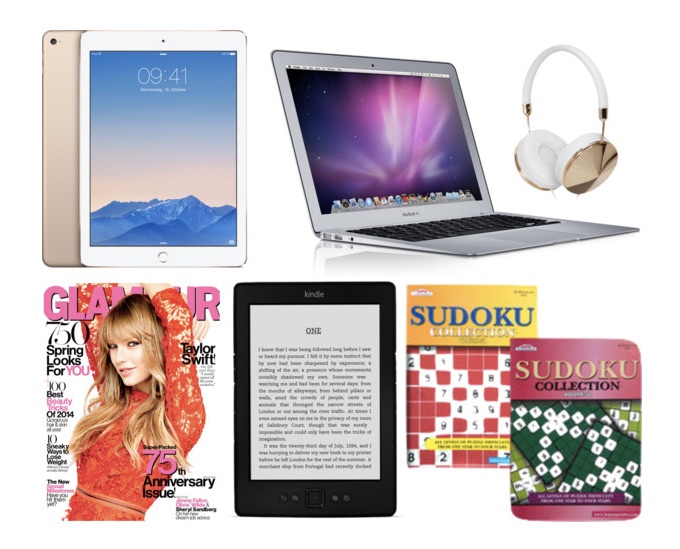 If you can, try and bring a tablet or a small laptop to watch films/listen to music on. Also books, puzzles, magazines etc. A lot of places won’t have free wifi and even if you do pay for it it can sometimes be a bit ropey depending on where you are. A lot of reading and doing puzzles happened on our trip last year! I think this time we’re going to try and download a series on the iPad to watch in the evenings.

If you’re going skiing for the first time this year I hope this will help! Or even if you’ve been before there might be some bits that you’ve forgotten that hopefully I’ve covered here. I sometimes forget how much there actually is to remember to pack – I think I’ll be using this guide myself too!