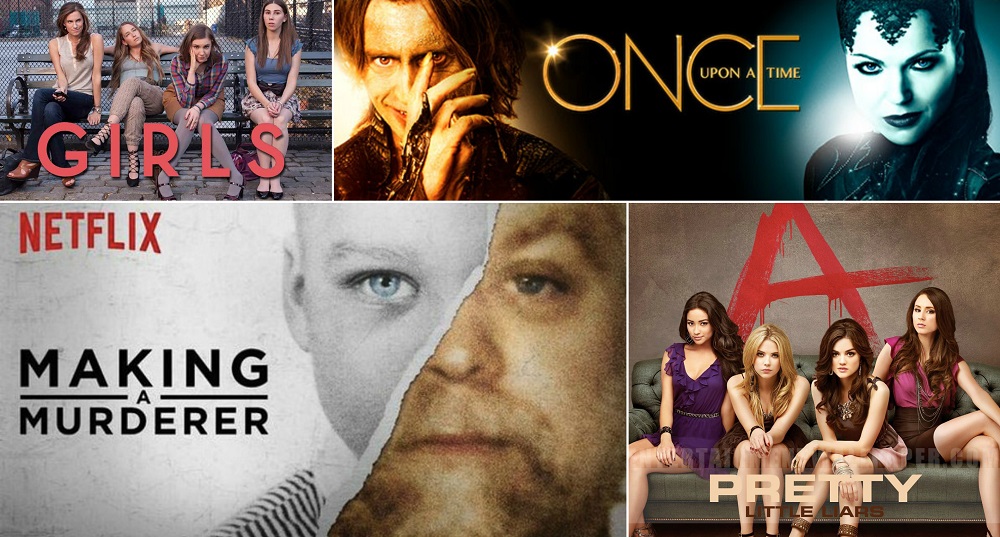 There have been a few additions to the binge-watching list recently, so today I’ve done a bit of a round up…

Once Upon a Time
I’d been meaning to watch this for so long, and I’m absolutely loving it – I’m a sucker for a bit of fantasy-drama. OUAT is about fairytale characters who have been cursed by the evil queen (from Snow White!) to live in the modern day world, and they have no idea of their origins. Might sound silly, but I’m totally obsessed with it now – #sorrynotsorry 🙂 I’m almost at the end of season two now, so no spoilers please!
Girls
This is just my new favourite thing, ever. Again, I’ve wanted to watch it for ages, but it’s not on Netflix and I could never be bothered to source it elsewhere, but my flatmate has all seasons, so she’s been re-watching them with me. It is so hilarious – it’s about 4 girls living in New York, and it’s just real life shit – all the weird and wonderful things that happen to twenty-somethings in the city – it’s an absolute riot, I cannot recommend it enough. Apparently the next season is out on the 21st Feb, so I have just over two weeks to get through about 3 seasons – totally do-able!
Making a Murderer
If you haven’t heard of Making a Murderer, then you’ve obviously been living under a rock somewhere. Seriously. Beware though, you’ll need to set aside 10 hours of your time, as this is one that you’ll be binge-watching from start to finish. I won’t give anything away, but it starts off documenting the story of a guy who was wrongly imprisoned for rape back in the 80s, and served 18 years for it. He was finally released and starting to get his life back together, when something else happens… so they carried on filming… trust me, just watch it!
Pretty Little Liars
Oh PLL, how I do love you! My flatmate Jami and I binge-watched the first 5 series and then we were left with a huge hole in our lives when it ended mid way through season 6. However, new episodes returned mid-January and finally the PLLs were back in our lives. Unfortunately only at 1 episode per week – what the hell – so we’ve been watching it weekly every Wednesday. So far I have to say it’s been a little slow, but maybe that’s because we’re only watching 1 per week?! Who knows. I’m intrigued as to how they’re going to do this series though. We know who ‘A’ is, so what’s next…!?
What have you been watching recently?